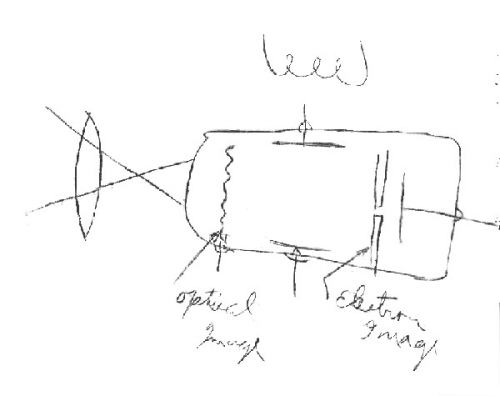 Above, the first hand-drawn rendering of the Image Dissector, ca. 1922. Arguably, every video display on the planet – including the one you are looking at now – can trace its origins to this drawing, which was presented during patent litigation in the 1930s.   Sadly, the myth that television was “too complex” for a …

The Distinction is Not Insignificant Read More » 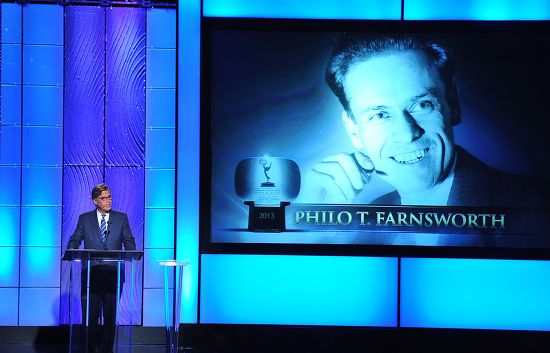 Jessica Moulton, with her grand uncle Skee Farnsworth and cousin Philo Krishna Farnsworth, accepting the induction of Philo Farnsworth into the TV Academy’s Hall of Fame, along with Ron Howard, also inducted on March 11, 2013 Ladies and Gentlemen, please meet Jessica Lauren Moulton – the great-grandaughter of Philo and Pem Farnsworth.  Her mother Camille … “The most effective lies are the ones built around a fragile germ of truth.” —Andy Greenwald   Please step aside as I dust of my lance and go looking for windmills one more time… For… ohm’god has it really been seven years now! – Aaron Sorkin’s play The Farnsworth Invention has presented a loosely twisted …

This just showed up in my Google alerts: World’s Fair Predicted TV’s Future (link to actual article since deceased) The article is a look back at the  introduction of television at the NYC World’s Fair in April, 1939 – the one where David Sarnoff famously and pompously pronounced, “Now we add sight to sound.” “Philo …

We were in Los Angeles last month – for Philo Farnsworth's induction into the Television Academy's Hall of Fame.  I suppose I should post some photos, but the whole experience was… well, let's just put it mildly and say that it was discouraging, and leave it at that.  Maybe there will be more to say …

The Most Famous Man You’ve Never Heard Of Read More »

There's been an increase in traffic to this site in the past week or so, which is quite possibly a result of the recent news that Philo T. Farnsworth – arguably the man who started it all – will be inducted next month into the Television Hall of Fame: This year’s honorees include Emmy®-winning actor/director/producer …

At Last: Farnsworth is in the Hall of Fame! Read More »

With the news of Neil Armstrong's passing yesterday , I am reminded that what always most impressed me about the moon landing in 1969 was not the fact of the landing itself, but the fact that more than half-a-billion people on earth witnessed the event via television – still the largest audience ever assembled for …

Now theater goers in Australia can hear Aaron Sorkin's twisted take on history, where "priority of invention" is awarded to the guy who actually LOST the case. Thankfully theatre goers will have a little help keeping track of proceedings, with a central narrator setting up each scene to avoid confusion. “One of the characters will …

….if you've heard this one before. From a story that ran in the Investor's Business Daily last week: In 1929, Sarnoff secretly hired Vladimir Zworykin, an engineer and head of TV research at Westinghouse, where he worked on an electronic scanning system for a prototype TV. The Russian immigrant soon hopped from Philadelphia to San …

I got a really interesting e-mail message last week from a reader of The Boy Who Invented Television telling the unlikely tale of the day William Randolph Hearst almost took an interest in Philo T. Farnsworth's little invention.

My maternal grandfather, R.L. Litchfield, was a longtime employee and close personal friend of William Randolph Hearst. Among his ancillary duties as an executive in the Hearst newspaper empire, my ‘Pops’ would also assist with fielding and giving Mr. Hearst his opinion on the many requests which would regularly be submitted for financial backing of various and sundry enterprises. Pops traveled widely and saw much. In his later years he would sometimes invite my young son and me to sit at the end of his bed and he would tell us stories about the many interesting people and places he had known. Almost invariably my son would chime in with a request for his favorite: “Pops, tell us again about the man who invented the television.”

One day in the late 1920’s Mr. Hearst [or Randy, as Pops called him] rang him on the phone at the office with a request that he go check out an inventor who had a laboratory over on Green Street, there in San Francisco. The inventor, one Philo T. Farnsworth had an electrical device which, “he says can broadcast pictures through the air. He wants me to finance the further development and eventual commercial production of the thing. Litch,” [as Randy called my Pops] “go over there and take a look at this fellow and his gadget and tell me what you think, will you.”

So my grandfather rounded up one of his associates who knew a little something about electricity and off they went. After the brief formal greetings, Philo asked the one man to stand next to a black box with a hole in the side in front of some extremely bright lights while he took my Pops into an adjacent area. There, on a little tiny glass screen, was an image of the other man standing nearby. Pops said the two of them looked the apparatus over very carefully and determined that there were no wires connecting the two devices.