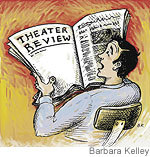 Some readers who are following the beginning of "previews" of The Farnsworth Invention on October 15, followed by the official "opening" on November 14, will perhaps find this article in Saturday’s Wall Street Journal by theater critic Terry Teachout instructive:

Why have previews in the first place? Because you can’t tell what a show is really like until you perform it in front of a paying audience and see how the viewers respond. For many years, big-ticket Broadway shows were tried out in other Eastern cities, then revised before coming to New York. In "Act One," Moss Hart tells how "Once in a Lifetime," the first play he wrote with George S. Kaufman, was rewritten twice, once after a pair of disastrous tryouts in Atlantic City and Brooklyn and again after an iffy preview in Philadelphia. But as budgets soared, out-of-town previews grew prohibitively expensive, and now most shows are "previewed" on Broadway for three or four weeks prior to their official opening nights.